A collection of training videos & tutorials.

Use the same tools the pro’s use.

< Back to Tuning Tips Intro Page

How to Apply P-tex


To prevent carbon formation when using p-tex: The key is to maintain a blue flame (don't let it burn orange). To do this, keep it low to the base or close to a metal scraper. This will minimize carbon buildup. First light, then, holding the candle at a 45 degree angle and rotate the lit portion against the metal scraper to get rid of the carbon. What that also means is that you're holding a metal scraper in your off hand, rotating the candle and scraping off the black drips, then bringing both scraper and ptex next to the section to be repaired. It is hard to describe, but basically, get as low as you can without putting out the flame. Here the ptex no longer drips, but the ptex becomes molten and pours out in one long run. The carbon floats on top and when you scrape it, it comes right off.

To repair base bubbles (from overheating a base): Either 1) First, drill a small hole or make a small slit with a razor knife through the p-tex in the center of the bubble. Inject a little epoxy inside the bubble using an epoxy syringe, then use some c-clamps and steel scrapers as plates to press out the bubble and let the epoxy dry. A longer setting epoxy is better than a quick one. 2) If this fails, you can cut out the bubble with a razor knife, then using a soldering iron apply a very thin layer of metal grip (a blend of epoxy/ptex) to cover the exposed fiberglass, let it dry and fill in the area with p-tex repair material using a repair iron or pistol. 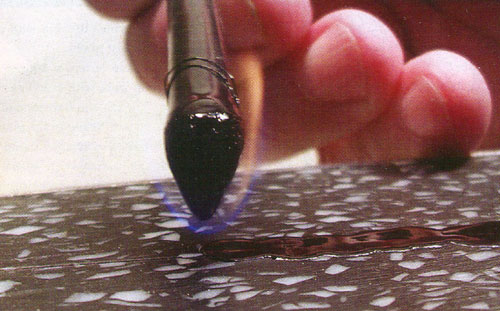 
The ski injury was a sharp downward hit that caused the outer edge to deform about 6 inches back from the tip into a small peak instead of a smooth curvature up the shovel tip. The hit caused a small 1-inch bubble under the ptex base due to delamination from the ski core. I skied all last season with the bubble but did fill the edge side with marine epoxy to seal it. This past November, I had ski shop do a base grind for flattening but they also ended up grinding the edge at the small peak so thin. Since the bubble was gone, they put a small ptex patch over the base core and edge keys. A couple times skiing simply just exposed the edge peak. In addition, my wax scraping did not help as it also exposed the metal edge peak even more.

See the overlapped before/after picture below.

The Before-Picture (on left) is shot directly towards the base showing the cutout with metal edge keys and ski core exposed. I taped around the area to half fill with Metal Grip. Not shown in picture was the gap between metal edge and the top sheet of the ski. There is a gap of roughly 1/8 inch where I can insert a razor point and it would go under the edge keys. The cutout is about 2 inches long by half inch wide.

First step was to melt-in Metal Grip over the edge keys and push it under to seep out on the side to fill 1/8 inch gap. I filled most of the cutout with Metal Grip and then let cool about 1 hour. The carefully shaved out about ½ to get below the actual base level at each end of the cutout. Used the Stanley tool (cheese shaver like) to work on the Metal Grip. Finally, a little sanding to rough the top surface. Using rubbing alcohol to clean material at various stages. Used a heat gun to pre-heat the cutout before melting-in the Metal Grip. Frankly a very easy 1st step with the KUU base repair tool.

Final step was simply melting ptex ribbon (slick sticks) over the Metal Grip until cutout was slightly over filled. After using the KUU tool to melt ptex in, I went over with heat gun which really melted smooth the small ridges from the wide iron tip. More shaving with Stanley tool to smooth out and did another ptex layer over total area. Heat gun and Stanley tool again to smooth out. Final ptex melt was to cover the edge peak high point in the middle of the cutout. Looks like a small ptex bump that covers the edge peak. See the After-Picture (on right) for final results.

If you look closely at picture, you can see the cutout outline and 2 horizontal lines where the edge peak is. Base repair is not perfect but I’m really pleased with results being my first time doing repair this involved. I finished hot waxing the skis and the base repair is rock solid. 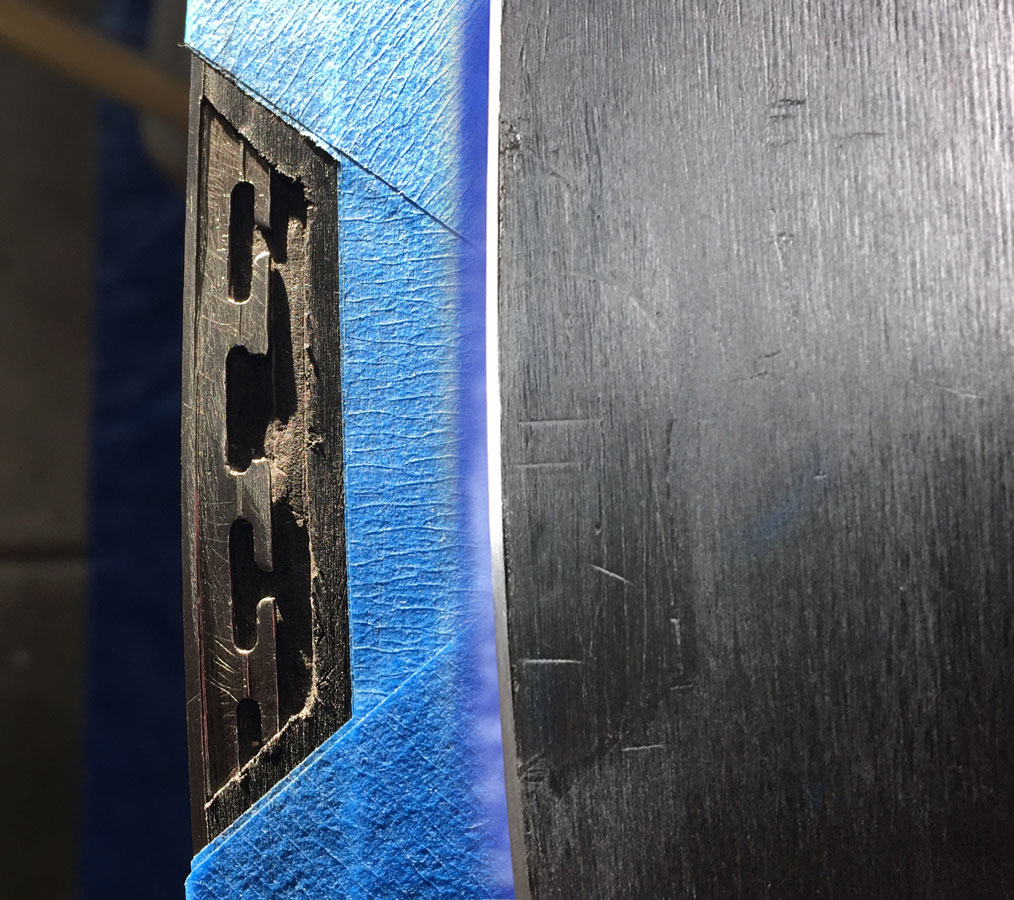 STAY IN THE KNOW

Sign up for the RaceWax.com newsletter to receive exclusive discounts on wax and tools, information on new products, and advanced tuning tips.

We want to hear from you!